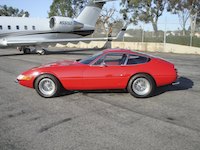 Every Ferrari is – to a greater or lesser extent – a landmark car, but few road models have captured the imagination of any car enthusiast like the Ferrari 365 GTB/4 Daytona.  Its all-alloy, four-cam, V12 engine displaced 4,390cc and produced its maximum output of 352bph at 7,500rpm, with 318lb/ft of torque available at 5,500revs. The 365 debuted at the 1968 Paris Salon, but earned its “unofficial” Daytona name by finishing 1, 2, 3 at that circuit the year before.

Prior to this car’s current owner buying  it in 2007, it had the same owner since 1977, who repainted it from Celeste, its original exterior paint color, and mechanically upgraded it.   The transmission was rebuilt in 1983 and a complete engine rebuild in 2006. This car has a solid, dent-free chassis complete with pop-up headlights and wood steering wheel.  Its current owner reupholstered the interior from its original, Pelle Rossa Scuro (burgundy with black inserts) to black with red inserts. This Ferrari Daytona still maintains low mileage and has been kept in pristine condition. 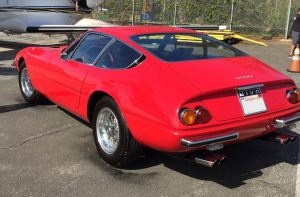 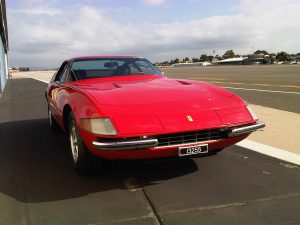