The light-weight tubular chassis was designed by John Tojeiro in 1952.  A superb handling sports car, the A.C. Ace Bristol competed at Le Mans in 1957 and 1958, as well as placing in the, “Sports Car Club of America Championships” of 1957, 1958, and 1959.  The A.C. is often referred to as the older brother to the Cobra. This Bristol’s original Bright Blue Metaline exterior and light beige interior have been upgraded for an emerald green exterior and black interior.  The original blue hood (soft top) and tonneau cover, side curtains, and jack are present. The engine has been replaced, the current numbered 100D2 941, which originally came from BEX 1073. There were around 735 Aces and 326 Acecas produced in total.

Per the A.C. Registrar in the United Kingdom for this vehicle:

This AC ACE Bristol was ex-factory on 27 November 1957, and fitted with 100D 734.  Colour was AC’s Bright Blue Metaline, with a light beige interior and a blue hood and tonneau cover.  It was shipped to Precision Autos of Houston, Texas. There is no “first owner” listed or anything more on the car, until it was shipped to France, reportedly with a blown engine, where the owner was David Maron, who lived in Marseille.

Apparently, Maron exchanged it for an Alfa, and 11 February 1980 is listed as the date of change of ownership (with an assumption that it was also the car’s arrival in France).

There is no record of who the car was bought from in the United States.  The French registration number is: 8847 JA 13.

At some point, the ACE Bristol returned to the United States and, in 1989, was bought by a Tom Mittler of Mishawaka, Indiana for a private collection. Unfortunately, this car never came with any service history when it was acquired by Mittler.  He made it part of his large collection of sports racing cars. However, the car was then sold to William O. Fleischman on behalf of W/F Classic Cars in 2016. Since that time, this Bristol has undergone close to $25,000 in restoration efforts. 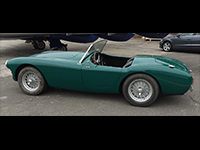 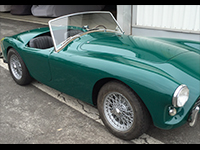 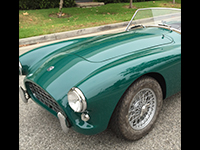